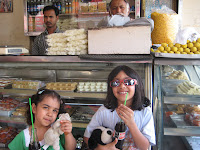 I have a confession.

At about 8:30 tonight my two girls were not in bed. In fact, they were already an hour and a half past their bedtime. Instead of getting bed time stories they were talking story at the Pegasus Restaurant in Greektown. We were walking north on South Halsted to our car parked at a busted meter around the corner. Neha, my usually moody six-year-old was practially skipping as I lugged a large tin filled with all their art supplies - coloring books, crayons, stuffed animals, and Harry Potter.

"Mom. Mom You know what? You know why I didn't take out my book to read tonight?" asked Neha.

"Well because I was so busy meeting people tonight. I had a lot of fun." Little Aria nodded in agreement as she lagged behind, trying to keep up.

They had a fantastic time. No, we were not coming from a park...Pump it Up or Chuck E. Cheese. We were coming from The Association of Women Journalist's (AWJ) summer picnic on the rooftop of Pegasus. I debated whether or not to take the girls. Sandeep was flying out of town and I didn't have help. But, I really wanted to connect with some fellow colleagues - old and new. So, for the first time ever I took them both with me to a work event. After all, Neha considers herself a budding author. She's already written about 200 words for a book she calls "Shampoo."

It was the best decision and makes me realize how important it is to put yourself out there and connect with a group as great as AWJ. President Karen Kring immediately sensed the photographer in Neha and put her to work taking some pictures. (Gosh - if she'd dropped that camera I would have died.) And then the two girls helped pick numbers for the raffle. They eventually picked one of our numbers - which got them really excited. By then they only had one of two books to choose from and Neha very excitedly picked Out and Proud in Chicago: An Overview of the City's Gay Community edited by Tracy Baim (Her publisher of all places was Agate Publishing who will be publishing my first cookbook next year).

Neha can read but obviously she missed the point here!

Thank you Tracy for signing it. Know your book is going to a great home. One of Neha's best new buddies is James and his partner Brennan, who are taste testers for my food project. They are going to truly love and appreciate reading this treasure - but only after I have a chance to look through it myself.

Thanks again to everyone there tonight I got to meet and reconnect with and those that I have yet to meet. What a great event!

Now on to perfecting Paneer ... three tries in one night later!